Petersham Nurseries - more to it than a Michelin star


The recent publicity about chef Skye Gyngell leaving Petersham Nurseries Café put me in mind of the 80’s V&A Museum campaign  - “an Ace Caff with Quite a Nice Museum Attached”.  You could be forgiven for thinking Petersham Nurseries is only about the unlikely Michelin-starred earth-floor venue in Richmond, west London.    There is, however, far more to the Petersham experience than the celebrated Café.  Many people go to this little oasis without ever being able to take a stance on its Michelin worthiness.

Petersham Nurseries began life as a plant nursery. It’s this, and the very simple tearoom, which attracts me.  The potting shed style tearoom provides soups, salads and substantial slices of no-nonsense cakes.  Prices are much lower here.  There are no fireworks on the menu, but it’s certainly far better than you expect to find in a plant nursery.


Take your tray into one of the characterful conservatories, or for more privacy bag one of the tables outside, scattered around the walled garden.  Visiting on the first day of March, the sun shone warm and bright and the conservatories were perfumed with the heady scent of potted hyacinths.

The thing about Petersham Nurseries, for me, is that it’s totally relaxing.  With trains taking less than 20 minutes from London Waterloo station, Richmond is a great escape when central London gets a little too much.  You are encouraged to  approach the Nurseries by bicycle or on foot.   The route alongside the river Thames is nice enough but it then takes you across the stunning unspoiled water meadows sweeping down to the river.  The bucolic scene was painted by JMW Turner and Sir Joshua Reynolds and the meadows have inspired poets and writers for centuries.   By the time you reach Petersham Nurseries your stress levels are reduced considerably.  Walking through the gates will take them down a few notches more. 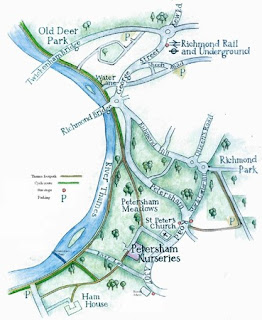 It’s impossible to visit the Nurseries without being seduced into buying a plant or two.   Displays are uncontrived.  Staff are helpful and know their stuff.  Prices are pretty good too but if you go on a Monday you’ll get a 10% discount and expert plant advice.  If you’re looking to learn more, they run courses in pruning, willow-weaving and the like.


Oh, and if you’re tempted by that celebrated Café, Skye Gyngell may have taken down her Michelin star, but fellow Australian chef Greg Malouf, of MoMo in Melbourne, is soon to take over for a three month stint.  The question is;  will the starry clientele stick with it or can they bear to tear themselves away and follow  Skye wherever she pops up next?  Fond as I am of my food, in this case, all I need to know is whether this change to one part will have an effect on the whole Petersham Nurseries.

A version of this article can be read at Huffington Post
Posted by Evie at 19:32