The return of Polpetto


I knew I missed Polpetto but until today I didn't know how much.  Its original incarnation was Upstairs at the French House on Dean Street in the heart of London's Soho.  I wrote about it soon after it opened in autumn 2010 and by May 2012 it was no more.  An awkward room and too small a space (23 covers) caused owners  Russell Norman and Richard Beatty to find a more suitable location for their spin-off from Polpo.  I doubt they thought it could take this long but the new Polpetto is now a reality, having quietly opened this week on Berwick Street just a 2-minute walk from the original site.   In the intervening period Chef, Florence Knight, has become rather better known through TV appearances and writing a rather good book - One: A cook and her Cupboard. I suspect it would have been easy for her to go the celebrity chef route, had she wanted to, but, no, she's back in the kitchen.  So, has absence made the heart grow fonder?  Or did the passage of time cloud my memory?

I soon realised none of that matters.  I'm breaking my rule of at least two visits before giving an opinion because, two dishes into lunch, I was sure I would be coming back again and again, and that's what counts.  I love a chef who's confident enough to use very few ingredients in a dish. Florence Knight does this with dish after dish and flavours sing out with clarity.  It's an admirably short seasonal menu of 11 savoury dishes ranging from £2.50-12, 4 sides £3.50-4, and 5 desserts £3.50-7.

A plate of off-menu crunchy Camone tomatoes dressed with a little olive oil was served for the sheer joy of having such wonderful fruits in the kitchen.  Cavolo nero with anchovy and burnt bread turned out to be young leaves of raw black cabbage given the caesar salad treatment.  Despite the fact I grow cavolo nero I'd never even thought of eating it raw, but I will now.  The little croutons were, thankfully, far from burnt but crisp airy pillows of loveliness.  Sweet mussels came with cannellini beans and three-cornered garlic, the flavours heightened with mild chilli rather than the savage punch of heat all too often delivered.

Perfectly caramelised scallops were on cauliflower two ways - pureed and roasted - and draped with wafer thin slices of luscious lardo.  It was a dish of so much promise I could barely wait for the plate to hit the bar before tasting it.  It did not disappoint.  Hare pappardelle was a deep-flavoured, gamey dish which slipped down far too easily.  Veal cheeks came cooked in white wine with slices of fennel.  The meat's gelatinous quality had melted deliciously into the sauce leaving soft, tender cushions of meat.  So far, so uncritical but there was a minor flaw in the form of a side dish of Wet Polenta.  In my mind's eye I ordered it thinking it was going to complement the veal saucing in much the same way as a buttery mashed potato does for an English stew.  It was too stiff to work as I had hoped, but that's a minor point.

A slice of Maple tart  was a divine, caramelic, custard of perfect wobbliness and a glass of Royal Tokaji paired with it very nicely.

Creamy Polpo house Prosecco and Corvina were good value choices out of a list of wines ranging from House at £18 to £83 for a Barolo 'Brunate' Marcarini 'La Morra' 2008, most also available by 25cl or 50cl carafe.

Anyone who has eaten at Russell Norman's restaurants before will expect attention to detail so no surprise that it's here in spades.  It's a nice space - 70 covers I think, though it feels more intimate.  The basement has four tables.  True they're on route to the loos but on the opposite side of the room you have the theatre of a great kitchen. I certainly won't be turning my nose up if offered one.

Dishes like Burrata, agretti and chilli; Bacon chop, whitty pear butter and walnuts; Milk pudding, rhubarb and rose, will all have to wait for another time.  And there will be lots of other times.


It's February.  Why on earth am I making ice cream?  Because I have a bag of frozen raspberries in the freezer and a great recipe.  In any case ice cream warms you up.  Really, it's true.  OK, the reason it's warming is that the body has to produce energy to digest the protein and fat content and, as every schoolchild knows, energy produces heat.  So, you see, it's good to eat ice cream in winter.  Personally, I don't need any persuading.

Last year we had a glut of raspberries so bagged a couple of kilos for the freezer. The thing with raspberries is, no matter how carefully you freeze them - yes I have tried spreading them on a tray - you end up with a soggy unappealing mush when they defrost.  Options for using them are limited, though I did find this Nigel Slater recipe worked pretty well.  Later in the year they'd be fine in a Summer Pudding, but I needed to start clearing space in the freezer now.  Making a raspberry syrup concentrates the flavour of the fruit, and it's perfect for swirling through vanilla ice cream.


Adding salt to ice to lower its freezing point was known to the Arab world as early as the 13th century.  Using this technique, a container of fruit essence placed in the ice could be frozen.  Fruit ices were described in Italy in the early 17th century but the first written reference to "ice cream" appears in a 1672 document from the court of King Charles II.  If the recipe was written down, it remains undiscovered.  A hundred years later, the French found that frequent stirring of the ingredients gave a smoother, less crystalline result.  They are also credited with being the first to add egg yolks to enrich the mixture.


I love ice cream but it's something I rarely buy from the supermarket as a quick look at the ingredients list most often shows sugar content way too high for my liking.  When you make it yourself, you are in control.  If you have a good recipe your ice cream won't be stacked with ridiculous amounts of sugar.  This recipe comes from La Grotta Ices who not only use the best quality milk, cream and eggs, but make a point of adding only as much sugar as is necessary, and not a spoonful more. 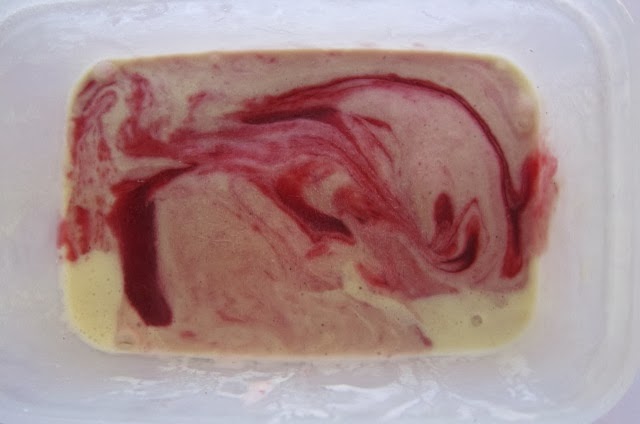 I've mentioned La Grotta Ices before, so if you want some background just click on the name.  I'll just say that I've never tasted better ices than those coming out of Kitty Travers' La Grotta ice cream shed.  Kitty's recipe for Raspberry Ripple Ice Cream, below, appeared in The Observer Food Monthly (OFM) magazine on 16 June 2013.  This is the first chance I've had to follow it and I can confirm it's a great recipe.


I made extra quantities of the raspberry syrup, and some meringues from the leftover egg whites. This gave me the opportunity to produce individual meringue desserts by lightly whipping up some cream, adding broken meringue and some syrup and freezing for later.  When you want to serve them, if you have more puree, you can pour a little over the top.  Note: I used dariole moulds but, if you prefer, the mixture can be frozen in a block and sliced for serving.


I'm giving Kitty's recipe for Raspberry Ripple ice cream here but you can follow the link to The OFM for the original with Kitty's invaluable insights on ice cream making.  Her advice to start making your mixture a day ahead does make all the difference to the result.  In case, like me, you don't have an ice cream machine, I've given the instructions for making it with or without a machine.

Ice cream:
Pour the milk and cream into a pan.  Add the split vanilla pod its seeds and the salt.  Place on a low heat and, stirring occasionally, until it just begins to simmer.
While the milk is heating, briefly mix the sugar into the egg yolks.
Pour most of the milk into the egg mixture and whisk to combine.
Return the pan to the heat and pour in the egg and milk mixture.  Slowly heat, stirring constantly, to a temperature of 85C (it will start to thicken at 65C).  Take the pan off the heat immediately and place it in a sink of cold water with ice cubes in it to cool the mixture quickly.
When the mixture is at room temperature, cover the pan with cling film, put the lid on the pan and place in the fridge overnight or for at least 8 hours.

Raspberry syrup:
Place the raspberries in a bowl with the sugar and set it over a pan of simmering water.  Cook until the fruit bursts and the sugar dissolves.  Remove from the heat, blitz with a hand blender and push through a sieve to remove the seeds.  When the syrup is at room temperature, chill in the fridge overnight.
(Kitty suggests stirring the raspberry seeds into a jug of water, leave in the fridge until the seeds settle, then sieve.  It gives you a delicious juice drink).

Next day:
Put a large, preferably metal, bowl in the freezer to chill.
Sieve the ice cream mixture into the bowl to remove the vanilla pod.  Blitz with a hand whisk for 30 seconds to re-emusify.

If you don't have an ice cream machine: Place the bowl in the freezer.  After 90 minutes take it out and whisk the mixture vigorously.  Repeat this procedure twice more.

Pour the syrup over the mixture, fold and swirl.  Scrape into an airtight container and freeze.

The ice cream will keep for up to a month in the freezer.