Before I say a word about this book - La Grotta Ices which was published in June - I have to declare I know the author.  Given the trajectory of her career, I'm sure I ate Kitty Travers's food at a couple of favourite London restaurants before we met.  I love a good pudding, and ice creams in particular, so a good pastry chef is to be treasured.  Then I spotted a little Piaggio Ape van whizzing across south east London.  It was driven by a willowy tall, rosy-cheeked woman who seemed to have found the secret to happiness.  And she had.  She had followed her dream.

I'm not sure of many things but I firmly believe we all have ice cream memories.  Often it's that first lick of Mr Whippy soft-scoop vanilla (with a chocolate flake if you were flush) in a dry, brittle, tasteless cone.  It's a memory of taste, time and place that stays with us.  For me it's the jingling sound of Greensleeves announcing the arrival of the ice cream van.  A strawberry Mivvi, please.  For Kitty Travers, her memory is a slice of supermarket economy vanilla brick that, after suffering several re-freezes emerged from its damp cardboard box as a "curious foamy gum".  I remember it well.  I suspect few of our first ice cream memories would stand up to much scrutiny on taste, but they are no less fondly held.


As with most things, once you've tasted the good stuff, you want more.  In Kitty's case it was the flavours of abricot, cassis, groseille, and callison in a little glaciere off the Croissette in Cannes that began the seduction.  A scoop of ice cream became part of her morning ritual before a 16-hour waitressing shift.  A dip into Jeffrey Steingarten's book The Man Who Ate Everything, specifically the chapter "The Mother of All Ice Cream", fed a passion to discover how such flavours could be delivered in the form of ice cream.  An inheritance allowed her to fly to New York to study and to 'stage' for Mario Batali and Meredith Kurtzman at Otto Enoteca and for Gabrielle Hamilton at Prune.  She thrived and then the visa ran out.  The boost to her confidence returned her to London where Fergus Henderson was only too pleased to employ her at St John Bread & Wine where she scooped up her first ice cream - Fresh Mint - as pastry chef.  Holidays in Italy were spent working, sampling and learning about gelato in the best places for it - Rome, Naples and Sicily.  Not all was 'la dolce vita' and decision time came when she was assured by a gelato maker that she could never learn to make ice cream like an Italian (being in her twenties, she was far too old!).  She decided there and then that she would try to do something "relevant to the place" she came from and "make it perfect".  She would make ice cream.  La Grotta Ices was established in London in 2008, named in recognition of that little glaciere in Cannes which fed her early ice cream dreams.

If the La Grotta Ices book doesn't make you value the importance of seasonality, nothing will.  The order reflects the author's ice cream making year which changes constantly as ingredients come into their, often short, season and then bow out.  She reminds that if you buy with seasonality in mind you will find fruits that are not only ripe and tasting at their best but good value too.


Achieving the perfect balance of water, sugar, fat, solids (proteins) and emulsifier is key.  The ethos is fresh, seasonal and minimally processed.  Expect recipes to include milk, cream, eggs, sugar, fruits and natural flavourings.  You'll find no 'fat-free' here, unless it's a sorbet - thank goodness. There's imaginativeness in flavours and textures in these 75 recipes but no 'let's see how off-the-wall we can get'.  Some combinations are creative and surprising but always thoughtful.  The recipes start logically in January with the arrival of sharp citrus fruits from Italy, their peels rich with oils, put to use in Kumquat Custard; Blood orange & Bergamot Sherbert; and Mimosa (blossom), Seville & Orange Rice.  We move through spring and summer's rhubarb, strawberries, cherries, peaches, apricots, blackcurrants and resiny early Pigeon Figs with ice creams like Leafy Blackcurrant Custard; Apricot Noyau; a sorbet of Tomato & White Peach; and Pigeon Figs & Pineau de Charentes.  Early autumn brings sticky figs, grapes, melons, plums, pear and quince, so we have Damson Grappa; Melon & Jasmine Sorbet; Pear, Myrtle & Ginger.  Late in the year there's a turn to richer flavours in the form of nuts, dried fruits, candied peels, butterscotch and malt so you'll find Pistachio; Medici Almond; and Butterscotch & Agen Prune.  Herbs, geranium leaves and fruit leaves are valued too, particularly useful if you are waiting impatiently for your fruits to ripen as the leaves (some are poisonous, so check) deliver interesting flavours on their own as well as adding another dimension to fruit ice creams.  There are recipes for Mint Chip; Blackberry and Rose Geranium; Blackcurrant Leaf Water; Peach Leaf Milk Ice; and several uses for the sublime fig leaf.

The writing around the recipes is pitch-perfect.  Little vignettes of the author's adventures in pursuit of a true passion: Memories of breakfasting on poached quince after feeding the livestock on an Urbino pig farm.  How to avoid, or enjoy, a Prickly Pear.  How eating too many Kiwis in the name of love led to a visit to a cowboy-hatted doctor, the part played by Mussolini in the drama, and how Italy can be too much if you're not careful.


There's good advice too, like: Keep your Loganberry source to yourself - they are as rare as hen's teeth and short in season; why good quality cocoa powder works better than chocolate in ice cream; keep your eyes open and nose alert to walnut trees and lemon verbena bushes on common land; after sieving berries, use the pips for making a pip juice; and eat chocolate pudding flavoured ice cream with a good friend so they can wrestle it from you before you polish it off in one go!

I am certain I will make every recipe in this book because I have the advantage of knowing just how good La Grotta Ices is.  I already have summer favourites like Strawberry Salad, Tomato and Peach Sorbet and Leafy Blackcurrant Custard.  I badly want to make Tamarillo ice cream because of its thrillingly tropical flavour and the sumptuous colour it takes on; Carrot Seed because I'm a grower and I'm intrigued; Lime and Botanicals because I like a nice G&T; and Pistachio because it's pistachio.

The artwork in the book is eye-catching and fun and photographs, by Grant Cornett, capture perfectly the nostalgia around our ice cream memories.  I should tell you too that I attended one of Kitty Travers's early teaching classes at The School of Artisan Food.  She still runs regular Introduction courses there so I have included a link just in case you want to catch, as I did, some of her infectious enthusiasm for her passion.  And here's a link to the La Grotta Ices site for up-to-date info on where you can buy the ice creams in London.

I don't know about you, but I still wouldn't turn my nose up at my ice cream memory - though I'm told my Strawberry Mivvi has slipped from its stick for the last time.  Probably for the best. 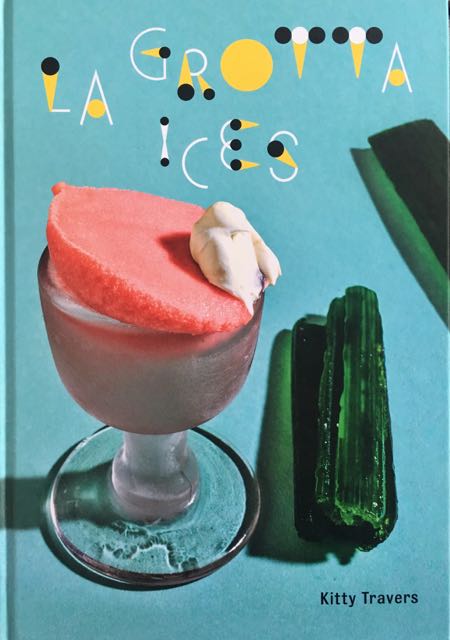 I bought this book